How Many Clubs In a Golf Bag? Maximum Limit and More Info

New golfers understandably have a lot of questions when starting out. Some of the more basic questions have to do with the maximum number of golf clubs allowed in a bag and which clubs to include in their bag.

If you find yourself asking questions like these, this article should has you covered!

How Many Golf Clubs Are Allowed In a Bag?

According to the official USGA golf rules, the maximum number of clubs allowed in a golf bag is 14 clubs. Any putter, wood, iron, wedge, or other club counts towards the limit.

With that said, the 14 clubs included in your bag are entirely up to you. So long as the clubs conform to USGA standards, you can have any mix of woods, irons, hybrids, wedges, or putters. While I wouldn't recommend it, you could have 7 of your 14 clubs be different putters.

If a round is started with fewer than 14 clubs, you can add clubs during the round so long as you stay below the limit.

Penalties for Exceeding the 14 Club Limit

Under USGA rules, there is a 2 stroke penalty when scoring a round by "stroke play" for each hole played using more than 14 clubs. The maximum penalty in a round for breaking this rule is 4 penalty strokes.

In a "match play" scenario, exceeding the 14 club limit will result in a player's score being revised by deducting one hole for every hole that a player had too many clubs in their bag, with a maximum deduction of two holes.

Though the 14 club limit exists in competition, it's up to you to decide if you want to hold yourself to it during a casual round. For example, if you're playing casually and are unsure of the wind conditions, you may perhaps want to start the round with a 3-iron (to flight the ball lower in case of strong winds) and a 5-wood (if the wind is not severe).

Is There a Minimum Number of Clubs Required?

While there is a maximum club limit, there is no minimum number of clubs required to play a round of golf.

Though it's not required to have 14 clubs, it's generally a good idea to take advantage of all 14 spots available or at least use most of the limit. The most significant benefit to more clubs is reducing the yardage gaps between any two clubs.

What Clubs Are Needed to Start Playing Golf?

Often, sets of golf clubs, particularly budget sets and those made for beginners, will include less than 14 clubs. While you may want to add to the set in the future, you certainly don't need a full 14-club set to get started playing.

A set including the following clubs is easily sufficient to start playing golf comfortably: 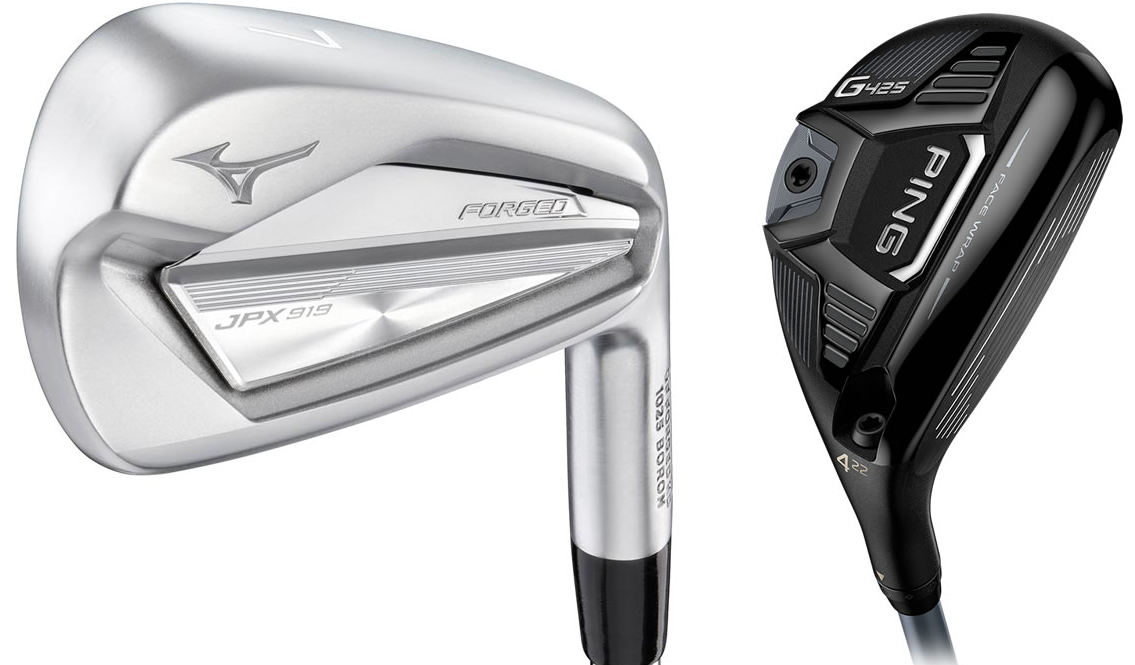 This setup is quite common for beginner golf club sets, though they may also include additional wedges, irons, hybrids, or woods.

It's also common for at least 2 wedges to be included in sets, like a sand wedge in addition to a pitching wedge.

Sets may also include more irons, like a 4-iron and 3-iron or low hybrids. They may even have an additional wood, like a 5-wood.

The clubs included in a set depend on its price and what players it's intended to be used by.

What Clubs Should You Include in Your Bag?

All golfers should include a driver and putter in their bag.

Almost all golfers will also have irons, hybrids, or a mix of the two types of clubs from at least 5-9 in their bag. If a player really struggles with distance, like certain seniors and children, irons and hybrids may be replaced with woods for more distance.

Most golfers will have at least 3 wedges, with many choosing to play 4.

Newer golfers will often get by just using a pitching wedge and sand wedge. As they improve and hit the ball further and more consistently, a gap wedge can be great to fill the gap in distance between the two wedges mentioned above.

It's important to note that wedges often are labeled by their degree of loft. Rather than common names like "gap wedge" or "lob wedge," these clubs may be labeled "52°" and "60°".

Nearly all golfers will also have a 3-wood, the second furthest hitting club.

The clubs to choose will depend on your skill level and how fast you can swing. Better and faster players are more likely to favor 4 and 3 irons. In contrast, less consistent and slower swinging players will typically fare better with higher launching and more forgiving hybrids or woods. With that said, even most of the best golfers now play a hybrid as a replacement for their lowest iron.

The choice between low irons, hybrids, or woods may also come down to the weather conditions. For example, low irons typically have a lower ball flight and less spin than their hybrid and wood counterparts, making them better for limiting the wind's effect on your ball. However, this lower flight and backspin makes it harder to stop the ball close to where it lands, so a higher flying hybrid or wood is likely optimal on less windy days.