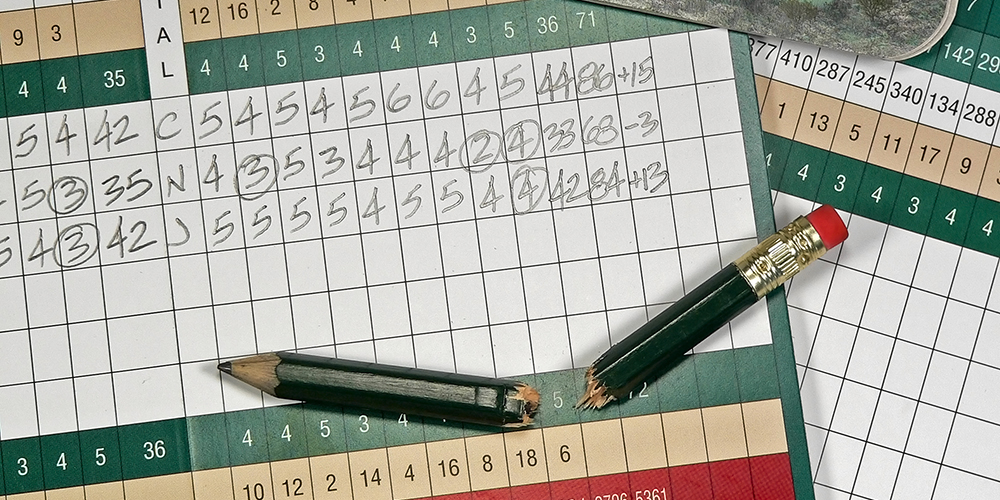 We've compiled a list of 100+ golf terms that are useful to know, but the golf scoring terms we'll cover in this guide are among the most essential when you're out on the course or watching televised golf.

Stroke - In golf, a "Stroke" is any forward club swing, including when putting, that a golfer is trying to hit the ball.

You can essentially use "Stroke" as a synonym for a shot/putt, but keep in mind that it also includes "whiffs" if you miss the ball when trying to hit it.

Par - "Par" is the number of strokes that an expert or "scratch" golfer is expected to need to complete a hole.

Par always includes two putts for each hole. On a par-4 hole, a scratch golfer is supposed to reach the green in two strokes, then complete the hole with two putts.

Distance, or more specifically "effective distance" (the distance a hole plays after accounting for whether it's uphill/downhill, its elevation, etc.), is the main determining factor in a hole's par rating.

Here are the USGA's distance guidelines for men:

For women, the USGA’s distance guidelines are:

The golf scoring term "Par" is also used to reference the combined par of a group of golf holes.

Par can also be used for multiple rounds of golf. In the PGA tour, tournaments are usually played over four days, with 18 holes being played each day.

On a par-72 golf course, par for four rounds is 288. On leaderboards and television graphics, you'll usually be shown a professional golfers score relative to par for all holes played thus far in all days of the tournament. Sometimes their scores for individual rounds will also be shown or discussed.

Under Par - The term "under par" describe a player's score when they've taken fewer strokes than par up to a given point of the golf course.

Over Par - The term "over par" can describe a player's score relative to par when they've taken more strokes than par.

Even - "Even" ("E") can be used to describe a golfer's score when it is equal to the combined par of all holes that they've completed.

Birdie - A "Birdie" is when a golfer scores one less stroke than par on an individual golf hole. Ex: 2 strokes on a par-3 hole.

For average golfers, birdies (and even pars) are far more challenging to make than pros would indicate.

MyGolfSpy and TheGrint (a Golf GPS and Golf Handicapping App) analyzed how often users of TheGrint made par, birdie or better, bogey, double bogey, and triple bogey or worse.

As you can see in the chart below, golfers with a 16-20 handicap only average 0.3 birdies or better per round. TheGrint users at the same handicap range only make 3.6 pars per round.

It's not until golfer's in that study reached a handicap in the range of 1-5 that they started averaging more than 1 birdie per round (and 9 pars per round).

Eagle - An "Eagle" is when a golfer scores two fewer strokes than par on an individual golf hole. Ex: 3 strokes on a par-5 hole.

Eagles are most commonly achieved by reaching a par-5 green in 2 strokes, then completing the hole with one putt.

Albatross / Double Eagle - An "Albatross" or "Double Eagle" is when a golfer scores three fewer strokes than par on an individual golf hole. Ex: 2 strokes on a par-5 hole.

An Albatross is far rarer than even a hole-in-one (ace).

Condor - A "Condor" is when a golfer scores four strokes less than par on an individual golf hole. Ex: 1 stroke on a par-5 hole.

Only four condors have been recorded in PGA history. Generally, the only way to accomplish a condor is to massively "cut off" a "dogleg" par-5 golf hole for a hole-in-one.

Hole-in-One / Ace - A "Hole-in-One" or "Ace" occurs when a golfer hits their first shot into the hole (cup), completing the hole in just one stroke.

Aces are very rare. According to American Hole 'N One, the average golfer's chances of making a hole-in-one on a par-3 hole are 12,500 to 1. The odds improve for professional golfers at 2,500 to 1.

When aces do occur, it's almost always on a par-3 hole, though hole-in-ones have been accomplished on par-4 and even par-5 holes.

While a bogey is a bad result for a low handicap or professional golfer, new and less skilled golfers are often fine with only needing one more stroke than par to complete a hole.

If you got a bogey on every hole of a par-72 course, you'd shoot a 90. This is a major milestone for newer golfers.

Double Bogey - A "Double Bogey" is when a golfer scores two strokes OVER par. Ex: 6 strokes on a par-4 hole.

Triple Bogey - A "Triple Bogey" is when a golfer scores three strokes OVER par. Ex: 7 strokes on a par-4 hole.